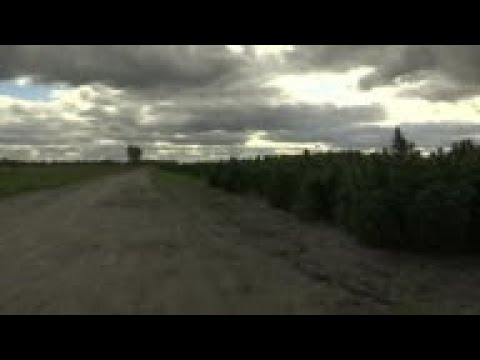 The legalization of hemp is spurring U.S. farmers into unfamiliar terrain, enticing them with profits amid turmoil in agriculture while proving to be a tricky endeavor in the early stages.
Up for grabs is a lucrative market, one that could grow more than five-fold globally by 2025. It’s driven by demand for cannabidiol, or CBD. The compound does not cause a high like that of hemp’s cousin marijuana and is hyped as a health product to reduce anxiety, treat pain and promote sleep.
Hemp was legalized federally less than a year ago, and more states are running pilot programs to facilitate production in the world’s largest hemp-importing country. The U.S. government last month finalized an interim national regulatory framework that is expected to pave the way for the crop’s widespread commercialization starting as early as 2020.
In Michigan, farmers who participated in the state’s first growing season since World War II cover the gamut.
Keith Hagen, an attorney, and his two farmer brothers founded Hempure Farm in the state’s Thumb region. It grew 340 acres of hemp, the most statewide, to be processed into CBD. Branching out past 7,000 acres of sugar beets, wheat and dry beans was primarily a financial decision.
Producing hemp, especially for CBD extraction, is highly labor-intensive and no easy task.
Obtaining high-quality seeds can be difficult and expensive. Little is known about safely or legally using pesticides. Weed control is an issue. So is the risk of cross-pollination, which leads growers to carefully walk their fields to pull male plants that can cause females to produce seeds instead of valuable flowers.
“It’s so new and so not understood from a manufacturing and even farming perspective,” said Andrew Blake, general manager of Blake Farms in Armada (ar-MAY’-deh) Township outside Detroit. “But I think it can be a legitimate part of the U.S. agriculture economy.”
Before a crop is harvested, it is tested in a lab for tetrahydrocannabinol, the chemical in cannabis that cause a high. If the THC level is “hot,” above 0.3%, the plants must be destroyed.
Dave Crabill (KRAY’-bil), who runs a marketing company, is among the hundreds of people who have registered as hemp growers in Michigan. He helped to launch a fledgling Michigan-based hemp industry association and is organizing an expo to help Midwest farmers prepare for the 2020 season.
“We’re optimistic for a great harvest in 2020,” Crabill said. “It’s a challenging crop to grow, but there is certainly more profit in industrial hemp than there would be (in) traditional rotation crops.”
Issues confronting growers and regulators include finding credible seed sources, weed control and essentially starting from scratch to identify buyers and a sense of the hemp market.
“We’re going to see greater improvements in technology and methods to help those farmers succeed,” Crabill said.