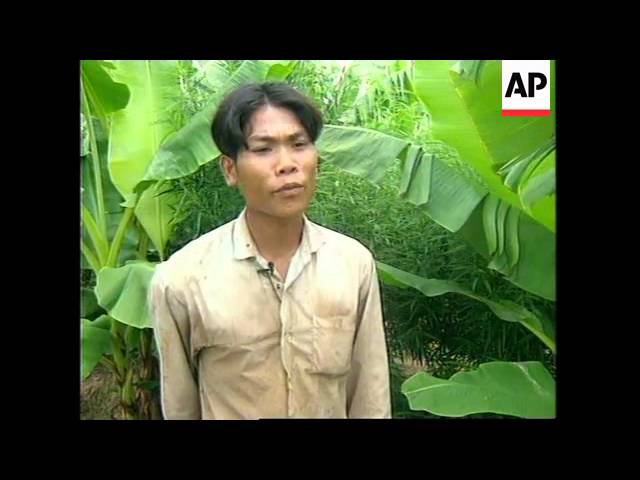 Farmers in Cambodia are turning to a new crop to earn more from their land – marijuana. It pays more than legitimate crops and so far the police have made little impact on this growing market.

In some provinces it’s already a booming industry and police accuse Thai businessman of investing huge amounts of money while cashing in on the burgeoning trade.

Viewed from over the Mekong River in Cambodia, New Island looks innocent enough.

But take a boat the short distance across the water, and a different picture appears.

Hidden amongst the banana plants is another – illegal – crop… marijuana. The cannabis plants thrive in the hot Cambodian climate while irrigation pipes help to ensure a healthy and consistent yield.

Further into the island away from prying eyes the camouflage is dropped. A whole field of marijuana plants is grown quite openly.

This farmer’s been growing it for three years. In a country with an average annual income per head of 215 U-S dollars, he can get up to 2 dollars a kilogramme, with little trouble from the authorities.

SOUNDBITE: (Cambodian)
“A few years ago no one ever came. It’s only this year that they started, so usually I have nothing to fear.”
SUPERCAPTION: Chhe Sambatt, Marijuana Farmer

Marijuana has been grown in Cambodia for many years, for cooking. But recently it’s become widespread, especially in areas bordering Thailand, where most of the crop ends up.

But police are now getting tough with the marijuana growers and they blame Thai drug barons for Cambodia’s cannabis explosion.

SOUNDBITE: (Cambodian)
“They grow it because Thai businessmen came here and gave them money to do it. Especially in Khandar, Koh Kong and Khampot provinces. They give them money and irrigation machines.”
SUPERCAPTION: Heng Po, Anti Drugs Officer

Police have seized hundreds of kilogrammes of drugs, and arrested almost a hundred people since November 1994.

But in the markets of Phnom Penh it is business as usual and the new tough line on preventing the sale of marijuana appears to have had little impact.

Buying cannabis is still as easy as buying cloth or food. It’s sold openly with no obvious attempts by the law to stop it.

But this could change if the police decide to concentrate on the small time sellers as well as the big dealers.

SOUNDBITE: (Cambodian)
“At first we’re after the big sources, the exporters, then we can go to the markets. The markets are just small time.”
SUPERCAPTION: Heng Po, Anti Drugs Officer

Few farmers get wealthy on the trade. They merely see it as a way to earn a bit more in order to survive.

For that reason he says he won’t stop till he’s forced to.