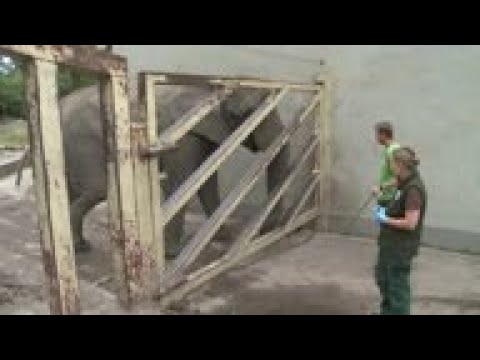 Medical
Share on Facebook
Share on Twitter
Share on Pinterest
Share on LinkedIn
(28 Aug 2020) Scientists at Warsaw’s zoo have been taking blood, saliva and other samples from the zoo’s three elephants in recent days to prepare to test whether giving them hemp oil can reduce their stress.
Dr. Agnieszka Czujkowska, a zoo veterinarian, said hemp oil, also known as CBD or cannabidiol oil, has been shown to reduce anxiety and stress in other animals, including horses and dogs.
The zoo’s experts thought it made sense to see if could also help their animals, including giraffes, rhinos and polar bears.
They decided to start their tests on their three African elephants, who have undergone a period of stress following the death in March of an older female, Erna.
While the study had also drawn some sensationalist headlines, Czujkowska insists that hemp oil is not a drug, and despite many people’s associations, it is completely different from marijuana because it does not contain THC, the main psychoactive compound in cannabis.
If the study works as hoped, the oil will merely “calm them down a little bit,” and have anti-inflammatory and other benefits, she told The Associated Press on Friday.
Some 300 samples — of blood, saliva, urine and feces — have been taken over the past weeks in preparation.
Among other things, the scientists are measuring the elephants’ levels of cortisol, the stress hormone.
If all goes as planned, they will be able to start administering drops of hemp oil in a few weeks.
After Erna’s death, the remaining two females, have struggled to establish a hierarchy.
The 23-year-old Fryderyka, also known as Fredzia, has long tried to control the other female, Buba, also 23, but was kept in check to some degree by Erna, who helped to resolve conflicts.
Since Erna’s death, Fredzia in particular has shown greater levels of stress as she tries to control Buba’s eating and other behaviours.

You can license this story through AP Archive: http://www.aparchive.com/metadata/youtube/6d656bcc7f4f428b9f12453ed0f7ce96

Using Sure To Grow cubes in an NFT hydroponics system
10 Ways to Smoke Weed With Everyday Items
Is CBD Oil Safe In Skin Care? (Or Even Legal?)
blunt sesh + beginner *WEED TIPS* (strict parents edition)
How High a Temperature Can You Use When Cooking with Cannabis