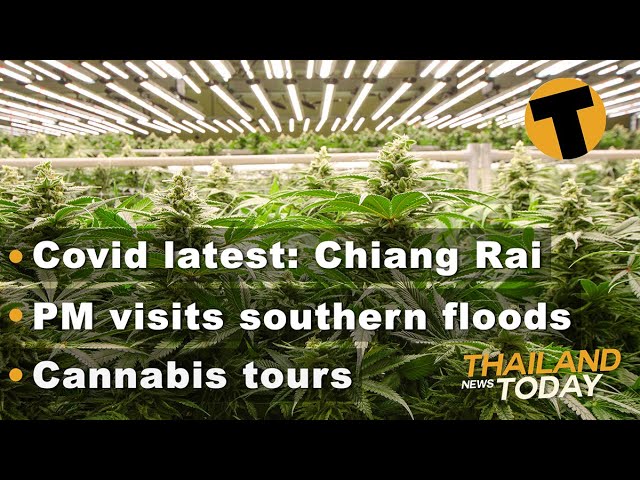 The passengers from 4 flights between Chiang Rai and Bangkok are considered at “low risk” of contracting Covid-19, according to a statement from the Public Health Ministry.

But the ministry, through an abundance of caution, is asking all passengers to self-monitor for the next 14 days, and report any symptoms such as fever, a cough, sore throat, or a loss of taste or smell immediately.

In all cases the flights were carrying people who had crossed from Myanmar back into Thailand without going through the mandatory 14 day quarantine, and were found to have tested positive since.

The hotel hit the headlines last week, amid claims that it operates as a centre for prostitution, with around 180 Thais thought to be working there.

PM in visit to flood-hit south, as death toll rises to 24

In the latest news from the floods in Southern Thailand, a woman has drowned in Surat Thani province, and 2 women have drowned in Songkhla, bring the total number of dead to 24. A total of 9 southern provinces are bearing the brunt of the southern monsoon over the Gulf of Thailand, with 920,000 people now directly affected.

The Thai PM Prayut Chan-o-cha spent most of yesterday visiting affected areas and promising help from the government.

Even as water levels begin to subside in some areas, more flooding has been reported in Surat Thani, Songkhla, and Trang, with 60% of the affected areas told to brace for more rain this week. In Trang 12,000 people and over 5,600 homes remain affected or still underwater.

A tour of medical cannabis at plantations across Thailand is in the works, potentially a new option instead of the temples and beaches.

While the tours could potentially be open to tourists, officials say the tour is for educational purposes and will first be for those interested in starting growing operations under the new Thai laws. The Public Health Ministry along with the Tourism and Sports Ministry plan to launch the tour next year. It would be the first “medical cannabis tour” in Southeast Asia.

A 15 year old allegedly stabbed his father to death after being told off for not doing his homework and playing too much on his smartphone.

Police in the Ratchaburi province, west of Bangkok, are investigating and have not yet pressed charges.

The grandmother says the boy has mental health issues.
Police officer shot to death by suspected insurgent in Pattani

A police officer has been shot to death by a suspected insurgent while driving his motorcycle in the Southern province Pattani. The suspect, dressed as a woman with a long head scarf and riding pillion on another bike, pulled out a M16 assault rifle and opened fire, surveillance camera footage shows.

The officer fell to the ground near the Kok Pho District Hospital. The pillion rider then jumped off the bike and shot the police at point blank with a 9mm handgun. The rider then grabbed the officer’s .357 calibre pistol and fled the scene.

Police found 10 shells from the M16 rifle and 2 shells from the 9mm pistol at the scene. Police are still investigating and suspect the attack was carefully planned. No arrests have been made.

What States Are Legalizing It in 2022 | States Legalizing Cannabis in 2022 | Cannabis News
Tests Show Bootleg Marijuana Vapes Tainted With Pesticides | NBC News Now
Study: Cannabis compounds can help fight COVID-19
How Marijuana Is Both Legal and Illegal in the U.S.
Should I Use CBD Oil? What is it?